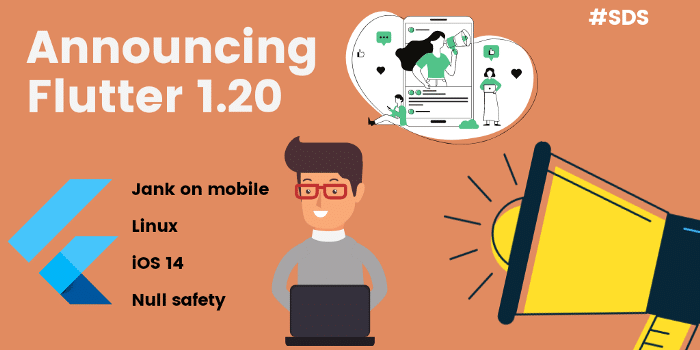 So Flutter 1.20 is now out and this is what Flutter has for all of us in store for this time

If the animations on your mobile app appear to be janky, but only on the first run, you can warm up the shader captured in the Skia Shader Language (SkSL) for a significant improvement.

If an app has janky animations during the first run, and later becomes smooth for the same animation, then it’s very likely due to shader compilation jank.

More technically, a shader is a piece of code that runs on a GPU (graphics processing unit). When a shader is first used, it needs to be compiled on the device. The compilation could cost up to a few hundred milliseconds whereas a smooth frame needs to be drawn within 16 milliseconds for a 60 fps (frame-per-second) display. Therefore, a compilation could cause tens of frames to be missed, and drop the fps from 60 to 6. This is compilation jank. After the compilation is complete, the animation should be smooth.

How to use SkSL warmup

Use the following instructions to collect and package the SkSL shaders:

With such integration tests, you can easily and reliably get the new SkSLs when the app code changes, or when Flutter upgrades. Such tests can also be used to verify the performance change before and after the SkSL warm-up. Even better, you can put those tests into a CI (continuous integration) system so the SkSLs are generated and tested automatically over the lifetime of an app.

When you run your app for the first time in debug mode, iOS 14 presents a popup dialog asking you to allow local network connections. If you choose Don’t Allow, hot reload won’t work, because it prevents the app from talking to Observatory.

Just to be clear: this only happens in debug mode. Your users won’t see this message in release mode. Only the debug version of your app needs to access the local network.

4) Updated the Desktop support page to reflect that Linux desktop apps (as well as macOS) are available as alpha.

For macOS desktop development, you need the following in addition to the Flutter SDK:

For Linux desktop development, you need the following in addition to the Flutter SDK:

The easiest way to install the Flutter SDK along with these dependencies is by using snapd.

Once you have snapd, you can install Flutter using the Snap Store, or at the command line:

If snapd is unavailable on the Linux distro you’re using, you might use the following command:

You can use the following steps to create a new project with desktop support.

Where <platform> is either macos or linux:

To ensure that the desktop is installed, list the devices available. You should see something like the following (you’ll see either macOS or Linux, not both):

To launch your app from the command line, enter one of the following from the top of the package:

To generate a release build run one of the following commands:

5) Null safety has been added to dart.dev